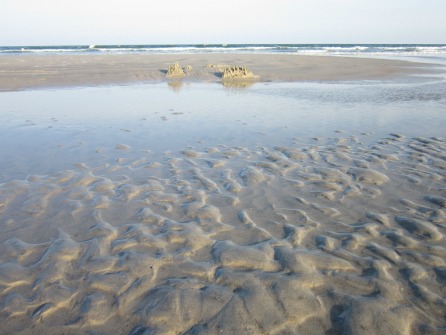 Residents of the beautiful community of Brunswick Forest have access to a number of area beaches, all located within a short drive to the community. There are also many beaches and resort areas that make for great day-trip excursions from the community, including nearby Topsail Island.

A VACATION DESTINATION
Once a quiet fishing village, Topsail Island now boasts many residential homes, but still manages to maintain its small-town charm. Many residents call the island home year-round, but the population grows significantly during the summer months when tourists arrive to rent out the island’s many beautiful beach homes.

ISLAND HISTORY
The island’s history can be traced back to the 1500’s and there are rumors that famous pirates, Blackbeard and Stede Bonnet, hid buried treasure on the island. The name “Topsail” is rumored to be attributed to all the pirate activity on the island. Island merchants used to watch from the mainland to spy for the top sail of pirate ships arriving to the island and looking to plunder goods.

PIVOTAL ROLE IN THE SPACE PROGRAM
During World War II, the United States Navy took over the island to use it for “Operation Bumblebee,” a secret project to develop test ramjet missiles for America’s jet aircraft and missile programs. This work helped to launch the United States’ space program. Today, the remnants of this work can be seen in old concrete observation towers found throughout the island. Visitors to the island can also explore the Missiles and More Museum which houses WWII artifacts, exhibits related to Operation Bumblebee and displays detailing the influence pirates had on island history.

NEARBY FESTIVALS
Topsail Island is also known for its abundant fishing opportunities. The island has several wooden fishing piers, and shrimp boats can often be seen offshore. The island is home to the Snead’s Ferry Annual Shrimp Festival which takes place every August. In September, the nearby town of Hampstead celebrates the spot fish with a festival featuring live music, craft vendors, food vendors and lots of delicious, fried spot.